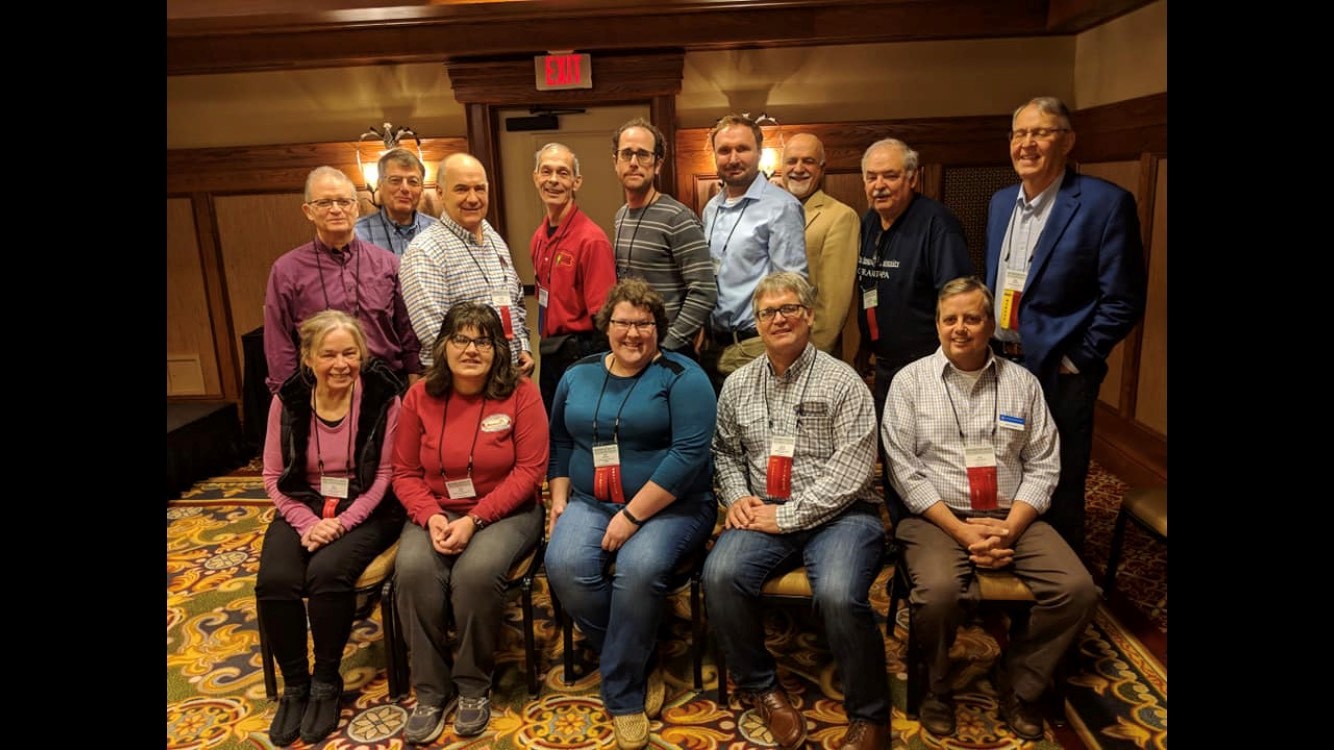 The General Membership of the Association held their Annual Meeting on January 30, 2109, at the Hershey Lodge and Convention Center during the 2019 Mid-Atlantic Fruit and Vegetable Convention.  The results of the mail balloting for the election of five Association Directors were announced. The members voted to amend and re-adopt the Constitution as By-Laws as recommended by the Board of Directors.  They also adopted additions to the Association’s Policy Resolutions besides receiving reports on the Association’s activities for the year.

One New Director Elected to Board

Tina Forry of Palmyra was elected to her first term on the Board of Directors by the members in the mail balloting.  Also elected for three-year terms by the members were incumbent Directors Barron Hetherington, William Reynolds, Robert Shenot and Jonathan Strite. Incumbent Director Alan Kemmerer was also elected to a three-year term on the Board by the Board of Directors.  Matthew Christner of Dawson, Jennifer Glenister of Hustontown, and Adam Voll of Wexford had also been nominated as Directors but were not elected.

David King and Timothy Weiser, whose terms expired at the Annual Meeting, chose not to run for re-election.  The terms of seven Directors expired this year, but in a plan to reduce the number of Directors gradually from 21 to 18, only six Directors were elected this year.  The Board was expanded from 18 to 21 in 2017 to 2018 to allow the Directors to elect one member each year to insure diversity on the Board of in terms of gender, geographic region, industry segment or expertise.  However, upon further reflection, it was felt it would be better to maintain the size of the Board at 18, so beginning this year, the members will only elect five Directors each year and the Board will elect one member.

Until 2012, members of the Board of Directors were elected by the members attending the Annual Meeting.  Since only about 30 to 50 members typically attend the Annual Meeting, it was hoped electing the Directors by a mail ballot would encourage greater participation in the election process, which it has.  This year there were about 141 ballots cast by members.  This year’s ballots were counted by election judges David Miller, Beth Gugino and Robert Baronner.

Brief biographies of the newly elected Directors are as follows:

Tina Forry – Tina along with her husband Greg and five children operate Risser Marvel Farm Market in Annville.  They have operated the market the entire season since 2007 since the Marvel’s retired but since 1991 they had operated it during the fall after the Marvel’s closed.  They have two high tunnels and grow about 25 acres of fresh market vegetables for their retail market that also features canned goods and local baked goods.  In the spring they offer pick-your-own strawberries and in the fall a corn maze.  They end the season with Christmas trees.  Tina enjoys marketing and served as president of the Pennsylvania Retail Farm Market Association.

Alan Kemmerer – For the past 27 years I have owned and operated Kemmerer Farms in Columbia County. Growing fresh market vegetables on approximately 250 acres for wholesale markets as well as producing vegetable transplants for other growers in PA and NJ. Crop mix currently consists of broccoli, cauliflower, cucumbers, bell pepper, eggplant, and tomatoes. Prior to this I worked as a loan officer for Northeastern Farm Credit for 3 years after college. I presently serve on the state Labor & Safety Committee for Pennsylvania Farm Bureau, the PVGA Government Affairs Committee and, for the last two years, the PVGA Board of Directors.

William Reynolds – Bill and his wife Lois have a 106 acre produce and grain farm located in Franklin Co.  They grow mainly pumpkins, gourds, and some watermelons.  Most of the produce is sold retail at their farm market and fall festival, with some being sold wholesale.  During the months of Sept. and Oct., they have a fall festival which has pick-your-own pumpkins, hayrides to the pumpkin patch, a large play area, a corn maze and grass maze.  Through the week, they schedule school tours with an educational talk about their farm and growing pumpkins, as well as beekeeping.  They have also attended the Gettysburg Farmer’s Market and Bill is past president of Gettysburg Farmer’s Market as well as being a member of the PVGA board for five terms.  He has served on the PVGA convention planning committee and is the current Secretary/Treasurer of the Association.

Jonathan Strite – Jon is a 1998 graduate of Middletown Area High School and 2001 graduate of Pennsylvania State University with degrees in horticulture and ag-business.  Upon graduation from college he returned to his family’s farm full time.  Strites’ Orchard was established in 1914 and currently consists of 300 acres split equally between fruits and vegetables.  Their main focus is the fresh market with 95% of their produce being sold through their on-site farm market that has been in operation since the 1950’s and which now includes a CSA.  They also operate several greenhouses where they grow bedding plants as well as all of the vegetable transplants that they use throughout the year.  They also have added a high tunnel for early season tomato production.  Jon’s primary role on the farm has been production.  He has served three terms on the Board of Directors and is the current President of the Association.

Barron Hetherington – Boots and his wife Robin operate B & R Farms in northwestern Schuylkill County. Daughters Katie, Morgan, and Blair represent the seventh consecutive generation to live in the farm house on Strawberry Lane. Boots and Robin farm 300 acres grain, hay, and produce. Robin starts off the growing season with hanging baskets and bedding plants in her greenhouse range. Asparagus and high tunnel tomatoes soon follow. The Hetheringtons are best known in their local area for their U-pick strawberry operation. Early sweet corn under plastic follows strawberry season with retail and wholesale sales of tomatoes, cucumbers, peppers and Indian corn continuing through October. Boots served several years as a member of the Penn State Board of Trustees and made “Strawberry Surprises” all week at the PVGA Farm Show Food Booth for many years. Boots served on the PVGA Board for 24 years, including two years as President, before stepping down in 2011 to serve as a Special Advisor to Gov. Corbett for four years. At the Department of Agriculture he was in charge of the state grants to the local fairs across the state. He was re-elected to the Board in 2016.

Robert Shenot – Rob is a 6th generation grower from Wexford, Allegheny Co.  Rob, along with his wife Leah and his parents run a 100+ acre fruit and vegetable farm consisting of 20 acres of orchard (apple and peach), and a wide variety of vegetable crops. The Shenots market their produce through their own retail market located on the farm which is situated in the northern suburbs of Pittsburgh. Rob graduated from Penn State in 2001 with a B.S. in Horticulture and now lives on the farm.  Rob is a current Director who has served four terms on the Board of Directors and is a former President of the Association.

Over the past several years, as a result of the strategic planning initiative in 2014, the Capacity Development Committee has been working to enable the Association to expand its staff capacity to serve Pennsylvania growers.  One of the changes they have been working on is changing the tax status of the Association from a 501(c)5 agricultural non-profit to a 501(c)3 charitable educational non-profit organization.  That would make the Association eligible for certain grants it is currently not eligible for and also make contributions or bequests from members tax-deductible.  Thus the Board of Directors proposed several changes to the Association’s constitution that are required to make this change in tax status, including changing the name of the “constitution” to “by-laws”.  Several other changes that were proposed would change the title of the chief staff person from Executive Secretary to Executive Director.  The Board submitted the whole constitution for re-adoption as the “by-laws” and the members voted without dissent to adopt the proposed by-laws.

It was noted during the discussion of the resolutions that the annual member survey had asked whether PVGA should continue to oppose Sunday deer hunting.  The preliminary results were 114 in favor of continuing to oppose Sunday deer hunting and 50 in favor dropping the opposition. The survey also asked whether PVGA should support Sunday hunting in the Northern Tier counties. The response there was 98 opposed to Sunday hunting in Northern Tier counties and only 45 supporting it..

The members also received the year-end financial reports which showed a balance of $230,738 in the General Fund, $148,922 in the Keystone Fund and $18,566 in the Onion Committee Fund.  Robert Amsterdam reported on the work of the Capacity Development Committee which is looking at how the Association can add additional staff capacity.  The Association working to become a 501(c)3 organization that would be able to receive tax-exempt contributions. They have also proposed a process for developing a succession plan.  President Jonathan Strite reported that the Association had facilitated with the Department of Agriculture an H-2A labor informational meeting in December.  He also noted that Board had decided to hold a strategic planning session in December of 2019 prior the annual meeting of committees.  Past President David Miller noted that no Rudoloph Grob Memorial scholarships or Young Grower Award were awarded this year due to lack of applicants.

Secretary-Treasurer William Reynolds reviewed the budget adopted by the Board of Directors which anticipates $432,400 in income and $474,400 in expenses in the General Fund.  He noted that membership was 738 after the second day of the convention, down from last year’s second day membership of 805.  Last year’s membership at the end of the year was 1,017.  The preliminary total of sales at the Farm Show Food Booth was $214,196, a new record in total sales.

Educational Committee chairman Brian Campbell reported that convention attendance was at 975, down from last year’s attendance as of the second day of 1,092.  Regional educational events are being planned for the summer along with continuation of the newsletter, website and email updates as the Association’s communications to members.  Government Affairs Committee chairman Rita Resick reported that legislative visits are being planned for March.  Vegetable Research Committee chairman Scott Hoffman reported the Vegetable Marketing and Research Board would meet that evening to select research projects to fund for 2019. The Association budgeted up to $60,000 for these projects.

Mr. Strite thanked Mr. Weiser for his 12 years of service on the Board of Directors and Dave King for his 6 years of service. The members observed a moment of silence in memory of the following members and friends of the Association who had passed away:  Samuel Beiler, David Brown, Frederick Funk, William Hanna, Jr., Robert Keller, Diane Miller, Dorothy Oswald, Josiah Stahl and Allen Weaver.