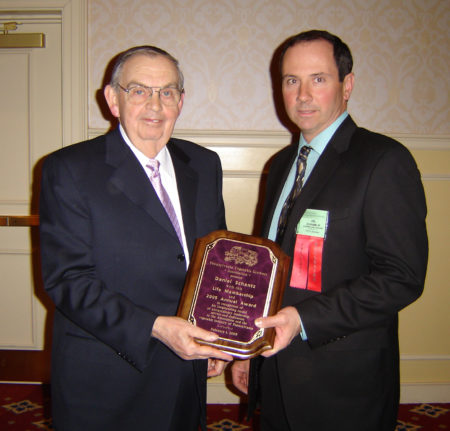 Daniel Schantz of Zionsville, Lehigh County, received the 2005 PVGA Annual Award and a Life Membership in the Association for “his extraordinary record of service and leadership to the Association and the vegetable industry.”   PVGA President Hilary Schramm, Jr., presented the award at the 2005 Fruit and Vegetable Growers Dinner at the Mid-Atlantic Fruit and Vegetable Convention in Hershey on February 1.  His wife Mildred and other family members and business partners were on hand for the presentation also.

Dan Schantz has always had a strong interest in growing vegetables.  Even before he was 12 years old he had projects and garden plots to grow vegetables, which he sold at his own stand in a local farmers’ market.

By the time he was in high school and taking the F.F.A. course he had contracts to grow tomatoes for Campbell’s Soup Co., which he continued doing for a number of years.  His interest in growing vegetables never diminished.

In 1957 Dan and his wife purchased a farm in Lehigh County where they grew all kinds of fruit and vegetables.  These were sold at their own road-stand market and also at stands at several local farmers’ markets.

A greenhouse was built on the farm to produce holiday and bedding plants to be sold at their retail locations.  Additional markets were added to sell more of their produce and plants.  In the early 1980’s Schantz was selling more than 200 tons of produce per week at three large farmer’s markets in the Lehigh Valley area.

As the demand kept growing, more and more greenhouses were built at the farm.  The wholesale plant sales were becoming a more major part of their business.  There are now 20 ½ acres of mostly gutter-connected greenhouses and approximately 30 acres of outdoor space prepped for growing potted plants at the farm.

In 1987 when the retail markets were at their peak and the greenhouse operation was really growing, the decision was made to sell the three farmers’ markets and concentrate on the production of plants and flowers, focusing on the wholesale market, and to grow only fall ornamentals in the fields.  At this time they retained one retail greenhouse location.  This was replaced in September 2002 with a new larger retail greenhouse and cut flower outlet in Allentown.

Schantz now grows over 700 acres of all kinds of pumpkins, gourds and Indian corn.  Painted pumpkins in 4 sizes are value-added items that are becoming very popular.  This past fall, nearly 400,000 pumpkins were painted.  The two in-between sizes are painted with a pad printer, and the smallest and largest sizes painted by hand.  Deliveries are made all over the United States as far west as California to several national chains.

Schantz is also active in a number of business ventures not related to the farm and is very active at Swamp Mennonite Church, serving as a Trustee and a number of other committees.  He is a Board Member of Spruce Lake Retreat, a Christian camp in the Poconos, and serves on the Development Committee of Quakertown Christian School.

While the business and community accomplishments of this Master Farmer are impressive, he was presented with the 2005 Annual Award and Life Membership in the Pennsylvania Vegetable Growers Association in recognition of the extraordinary leadership, vision, dedication, and support he has freely given the Association and the vegetable industry in Pennsylvania.

Few, if any, other individuals have been as instrumental in providing the leadership to the Association that has fostered the growth of PVGA over the last 30 years.  He has been an active member of the Association for more than 40 years and a Director for at least 35 years – with probably one of the best attendance records of any Director.  He has served as President of the Association in each of the last three decades of the twentieth century (in the 1970’s – 1980’s and 1990’s).  With the traditional progression through the chairs, that translates into 24 years of service as an officer of the Association.

Schantz has also served on numerous committees, most notably the Convention/formerly Conference Committee.  He was a leading advocate in expanding the vegetable educational program at the Hershey meetings to include multiple sessions and has been steadfast in supporting bringing in quality speakers as a means of improving the educational value of the meetings to our growers.

He is also a charter member of the Pennsylvania Vegetable Marketing and Research Program Board and served as Chairman for the first five years from 1989 to 1993.  He has continued to serve on the Executive Committee since then and again has been a key player in providing leadership on that Board as well.