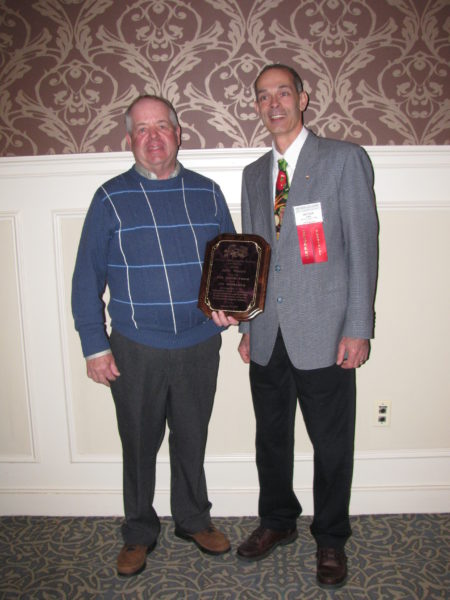 John Mason is the owner of Mason Farms in Lake City and former President of the Association.

Mason, who was also granted a Life Membership, is an Erie County fruit and vegetable grower who currently farms over 400 acres.  In 1974,  he and his wife started with approximately 100 acres of processing tomatoes and field corn.  In only 2 short years he become one of Pennsylvania’s top tomato producers eventually earning champion grower awards 4 times in 1976, 79, 80, and 81.

In 1982, with the help of his wife, two sons, and some close family friends, Mason opened his first retail outlet on a picnic table in a field located next to his home.  And as they say, the rest is history.  Today he and his family operate one of the premier farm markets in Erie.  The operation still focuses on the production of quality fruits and vegetables, with grapes, sweet corn, strawberries, beans, and yes tomatoes making up the largest portions of his production. The business includes six retail outlets, a large fruit and vegetable wholesale business, a landscaping company and greenhouse production facility.

But besides building a successful business in Erie, John also spent many hours driving to State College and Hershey for 30 years to attend meetings of the PVGA Board of Directors.  He served two two-year terms as president and four years as secretary-treasurer. He is also a past president of the Erie County Horticultural Society and is a director on the Erie County Land Preservation Board. He was selected as a Mid-Atlantic Master Farmer in 2001 and Outstanding Young Farmer in 1983 as well as an Outstanding Conservation Farmer. In his spare time has helped manage and run his local mini-league basketball program for over 15 years and was a volunteer fireman also for over 15 years.