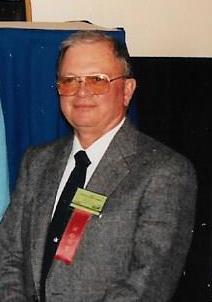 The Association’s third Annual Award was presented to Boyd A. Mertz, past president and secretary-treasurer, at the Annual Fruit and Vegetable Growers Dinner on January 29, 2002, in Hershey during the Mid-Atlantic Fruit and Vegetable Convention. Mertz, who was also granted a Life Membership, played an active leadership role in the Association for nearly forty years.  Few members have contributed as much to the Association, not only in terms of time, effort and faithfulness but also in terms of leadership.

A 1985 Master Farmer, Mertz took over his father’s interest in the family greenhouse business in 1960 after working nine years as a chemical engineer.  Through the years he added plastic greenhouses to the existing glass greenhouse range, converted from traditional ground culture to a soilless media tough culture for his main crop of tomatoes, used fogging instead of traditional spraying and then in late years switched to bio-pest controls and bumble-bee pollination – always working closely with Penn State extension personnel and other industry experts to keep up to date on developments in the industry.

A meticulous record-keeper, he kept close tabs not only on the time spent each day on different tasks to determine which crops were the most profitable, but also on fertility levels, daily picking yields and so forth.

Despite the fact that he was not involved in field production which the Vegetable Growers Association focused on, Mertz credited his involvement in the Association and with Penn State for many of his sales  contacts  through  the  years.

For many years, he wholesaled much of his tomato crop to numerous New Jersey farm markets.  When he was named a Master Farmer, he was quoted as saying:  “I have never done anything original – but I have copied successful techniques.  That’s what it takes – and attention to details.”  That attention to details earned him a reputation not only for quality greenhouse tomatoes, but also for some of the nicest hanging baskets, geraniums and poinsettias around.

After serving as President of the Association for two years, Mertz was elected Secretary-Treasurer in 1971 – a job he held for 30 years until last year.  He often said he spent the Association’s money like it was his own – according to the auditors that meant very carefully. His position as Secretary-Treasurer also gave him a seat on the Executive Committee and he played an active role in guiding the Association through such changes as establishing a food booth at the Farm Show, hiring an Executive Secretary, moving the Vegetable Conference to Hershey 25 years ago, and the growth of the Conference/Convention and the Association over the last twenty years.