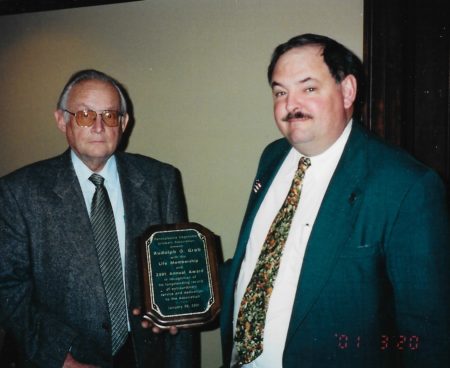 Last year PVGA began the new millennium by instituting an Annual Award program.  In the past the Association from time to time presented special recognitions to certian individuals or life memberships to persons who have a longstanding history of service to the Association.  But the Board of Directors decided it would be appropriate to annually recognize an individual who has made a special contribution to the Association or the vegetable, potato and berry industries in Pennsylvania.

As an Association, PVGA has been blessed with many individuals who have other the years vountarily dedicated countless hours of time to make the Association run.  Like any Association, these individuals are the PVGA’s lifeblood.  Rudy Grob is one such individual who stands out and represents a rare example of long-term dedication to an organization.

He started working on the Lancaster Co. vegetable farm of Amos Funk at the age of 12.  Early on Funk recognized his supervisory skills and put him in charge of the raspberry pickers.   He continued working at the farm through high school and college.  He enjoyed selling produce so much that during college, he came home weekends so he could go to Saturday market.  After graduating from The Pennsylvania State University in 1956 with a bachelor’s degree in Horticulture and completing the Reserve Officer Training Course, he returned to Funk’s Farm in Lancaster County.  For the next 40 or so years he worked at the same farm in a variety of positions, but excelling in merchandising produce and providing exemplary customer service as the farm moved from selling their produce primarily at farmers markets to developing a large roadside farm market and garden center.  After he retired from the farm, the farm eventually quit attending their last farmers market because they could find no one else with his sales and merchandising skills and energy.

Amos Funk, also a PVGA Life Member and former President, got Grob involved in the Vegetable Growers Association in 1957 where he has served on the Board of Directors for 43 years, including 14 as Secretary-Treasurer.  During his tenure as Secretary-Treasurer, there was no Executive Secretary.  Consequently he was responsible for maintaining all the correspondence, dues collections, meeting minutes, and financial records using a manual typewriter and carbon paper – all for a token salary.  He gave up the position in 1971 when he assumed a position on the Commander’s Staff of this Reserve Unit.  He retired from the Reserves in 1976 after 20 years of service.

Grob has been a fixture at the registration desk of the Vegetable Conference since the years when the Conference was held at the Nittany Lion Inn in State College through the transition to moving the Conference to the Hershey Lodge until the present.  He has been active in planning the Program and details of the Convention through the years, especially the retail marketing aspects of the Program.  He personally has probably sold more vegetable growers on the merits of PVGA membership than anyone else by using his salesmanship talents at the registration desk.

Over twenty years ago, he headed up a committee to develop a PVGA food booth at the Pennsylvania Farm Show.  Beginning with modest sales of a several thousand bowls of vegetable soup, the booth has grown under his leadership to sales of over $80,000 annually.  He has volunteered a week of his vacation time each year since then to manage the soup and salad operations of the food booth – except for three years – twice when he was unable to because of his own health and once because of his mother’s health.  When the Association began a booth at Ag Progress Days, he again volunteered some of his vacation time to help when he could.  These two ventures have enabled PVGA to budget $30,000 annually for vegetable and small fruit research.

It is a fair assessment to say that PVGA membership, the vegetable program of the Convention, the PVGA Farm Show booth and consequently PVGA support for research owe more to the dedication through the years of Rudy Grob than few other individuals.