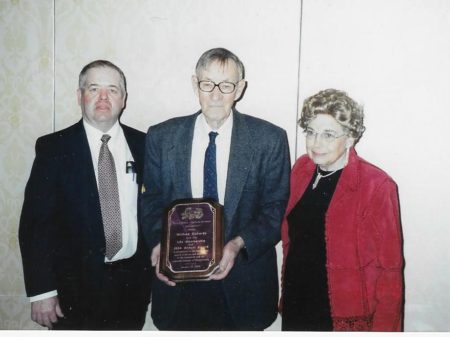 Wilfred Richards of Dalton, Lackawanna County, received the 2004 PVGA Annual Award and a Life Membership in the Association.  Richards faithfully served on the Association’s Board of Directors for 20 years.  Not only did he so enjoy selling vegetable soup that he volunteered to work several days at the PVGA Farm Show booth, but he also was a fixture at the PVGA Convention registration desk  for most of those twenty years.  He’s a good salesman and was responsible for persuading many growers to join the Association.

Richards, 76 years old, has been farming about 55 years. He was in a partnership with his older brother for a few years at first and milked cows for eight years. On his own for most of his farming career he has farmed about 20 acres of fresh-market vegetables and an additional 60 acres of hay and grain.  He retailed virtually all of his produce at the Scranton Farmer’s Cooperative Night Market.   He became President of that organization in the mid-70’s and served in that role until 2003 – about 30 years.

For the last 33 years he has also been the owner of Richard’s School Bus Service and currently has six bus routes.  Like his interest in the general vegetable industry, he was also active in the Pennsylvania School Bus Association where he has served on the Board of Directors.

Richards served on the Lackawanna County Cooperative Extension Board for 21 years, serving as treasurer for 7 years and president for 10 years besides being a township supervisor for 16 years including time as chairman.

He and his wife have one daughter who lives in Michigan. They have two grand-daughters and a grandson.