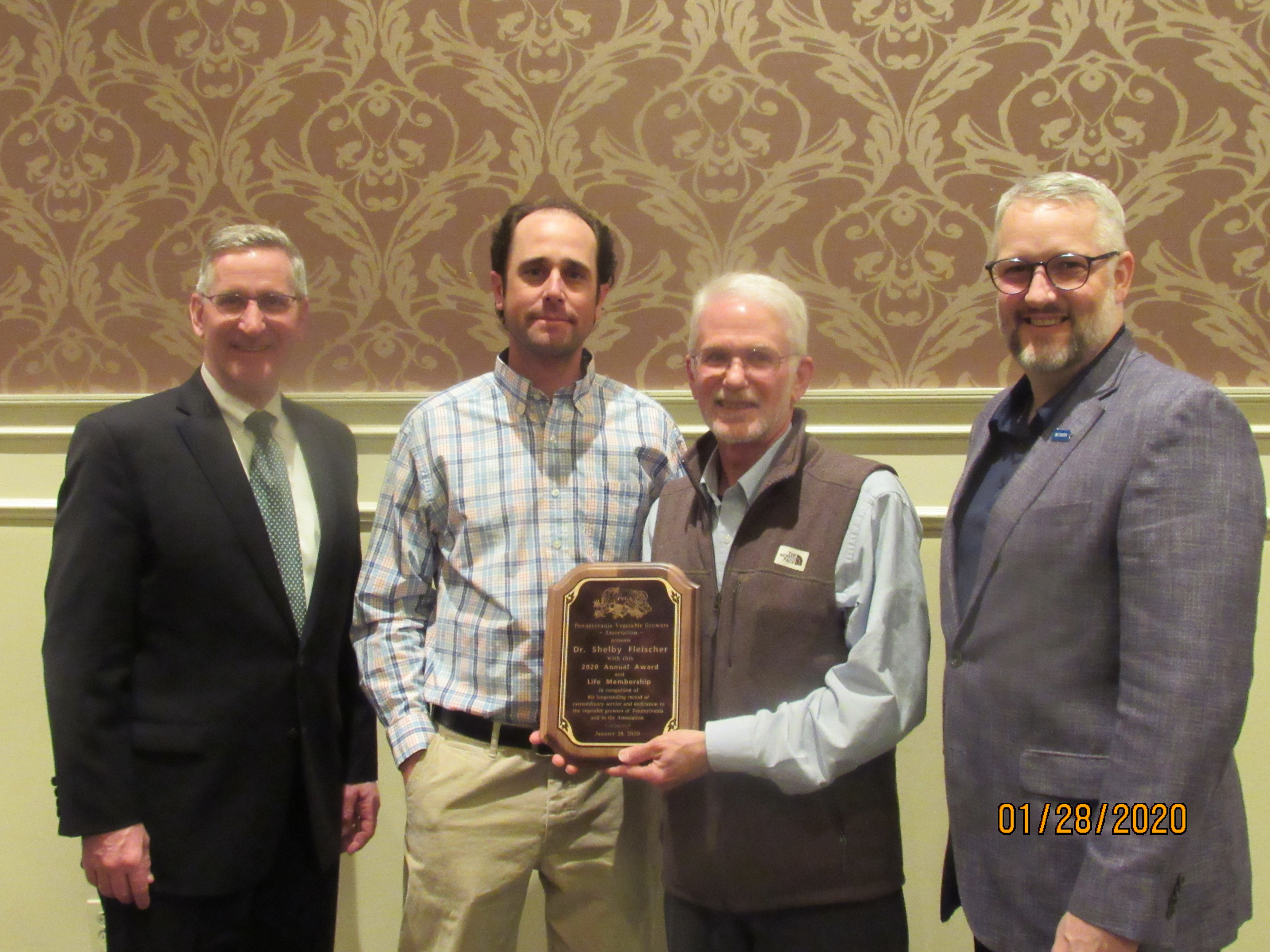 Each year the Pennsylvania Vegetable Growers Association gives its Annual Award to an individual who has a long-standing record of service and dedication to the vegetable, potato and/or berry industry or the Association.  This year’s Annual Award and a life membership in the Association were presented to Dr. Shelby Fleischer, Professor of Entomology at Penn State University for his 29 years of serving the vegetable growers of Pennsylvania as the vegetable extension entomologist. The presentation was made during the annual Fruit and Vegetable Growers Banquet at the 2020 Mid-Atlantic Fruit and Vegetable Convention at the Hershey Lodge in Hershey on January 28.

A native of Washington D.C., Fleischer attended St. Mary’s College in Maryland where he earned his bachelor’s degree in Biology.  We went on to Virginia Tech for his master’s degree and then down south to Auburn for his doctorate –  both degrees in entomology.  He worked as a research associate at Auburn University before returning to Virginia Tech as a research scientist from 1987 to 1991.  In 1991 he started at Penn State as an assistant professor with a research and extension appointment in entomology.

Fleischer served as a grants panel member for regional and national IPM programs, the Methyl Bromide Transitions Program, the Biotechnology Risk Assessment Grants Program, and an EPA Scientific Advisory Panel.  He has been an invited symposium speaker at the French Association of Plant Biotechnology, multiple land-grant University seminars, multiple symposia organized by the Entomological Society of America, and a plenary speaker at the Eastern Branch of this society.  He received the Distinguished Achievement Award in Extension from the Eastern Branch of the Entomological Society of America in 2011.

His over 100 research publications with over 3,400 citations focus on the structure, dynamics, and management of insect populations and communities in agroecosystems.  He was a team member in the analysis that demonstrated areawide reductions of European corn borer from adoption of Bt-maize, which influenced the debate about the risks, benefits, and regional scale implications of using transgenes in agriculture.  Work involving neonicotinoids as seed treatments is receiving increased attention due to effects on bees.  Recent work is demonstrating the ability of wild bee communities to achieve the ecosystem service of pollination in our agroecosystems.  Managing insects that vector plant pathogens has been a research focus, with diabroticites that vector bacterial pathogens in cucurbits, and aphid-vectored viruses in legumes.

Fleischer’s Extension activities focus on IPM in vegetable crops, with a priority on advancing economically feasible management that improves worker and environmental safety.  His sampling plans have been adopted in alfalfa and hardwood forests in the US, and leafy greens in the Caribbean. The PestWatch web-mapping platform he initiated in 1998 for sweet corn IPM was used by 15 Penn State Extension Educators in 2019.  Data flowed from 32 sites distributed among 22 counties in PA, plus sites in MN, NY, DE, VA, and MD.

Now a full professor, he has traveled the state speaking to vegetable growers at numerous local meetings over the last 29 years helping them learn how to control their insect pests – both the common ones affecting sweet corn and cucurbit crops, but also the new arrivals like the allium leafminer.  He has also helped growers evaluate new technologies like Bt sweet corn and neonicotinoids and as well as developing the sweet corn insect monitoring network many growers use each year to time their spray schedules.

He and his wife Barbara have two daughters and three grandchildren whom they enjoy visiting.  The Association is pleased to present its 2020 Annual Award and a Life Membership in the Association to Dr. Shelby Fleischer for this long-standing record of outstanding service and dedication to the vegetable growers of Pennsylvania and to the Association.