Jonathan “Jack” Grace, a PVGA Life Member, passed away on May 17 at the age of 82 after a five-year battle with cancer.  A native and life-long resident of Grove City, he and his family operated Graceland Farm Market in Grove City offering fresh fruits and vegetables as well as greenhouse ornamentals.  The Market also includes a section of decorative glassware.  For about 25 years or so, Jack along with his daughters Nancy and Jackie, have helped at the PVGA Farm Show food booth – including 22 years where they volunteered for the entire week of the Farm Show to manage the soup section of the booth.  This past year was the first year Jack was not able to help because of his health.  His cancer treatments the past several years limited his energy but he persevered in not only continuing to help at the Farm Show but also doing as much farm and greenhouse work as possible. 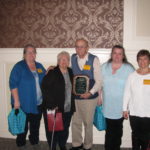 The obituary for Jack can be seen here.  Below is the newsletter article that appeared in the February 2016 Pennsylvania Vegetable Growers News reporting on Jack being honored with a PVGA Life Membership.

In 1937 on a family farm in Mercer County dating back to the 1830’s, Jonathan “Jack” Grace, a fifth generation farm boy, was born.  With this rich heritage running in his blood it is no wonder he has worked that farm his whole life;  beginning by following his Father and Grandfather around and learning by example he developed a strong work ethic that still shows today as he often works circles around his children and grandchildren!

This attitude also showed itself in his schoolwork where in a little one-room country school he completed two years in one allowing him to graduate with honors from Grove City High School a year ahead of his peers.

As a young man Jack was active in 4-H and started to develop his own farming projects including raising hogs for his high school FFA chapter, of which he was a charter member.  He was also a member of various judging and  demonstration teams traveling with his fellow members and team mates to local, regional and ultimately the state contests held at the Pennsylvania Farm Show in Harrisburg,  Through his hard work and diligence he earned the prized Keystone Degree.  Years later, after instilling the love of farming into his own offspring with three of them also earning the Keystone Degree, he and his wife were awarded the Honorary Keystone Degree.

While still in high school he helped a neighbor, Harvey McDowell, with his custom farm work.  He also assisted his father, James Grace, who was the Eastern States representative for the area, in organizing feed deliveries by helping to unload the rail cars and sort out the orders for pick up and delivery.  Once old enough and able to buy his own truck he was put to work making some of those deliveries himself!  Over the next decade or so Jack occasionally fit in delivery or pick up of machinery for McDowell’s Farm Implement, a New Holland equipment dealership.  Even with all his other jobs and responsibilities for several years after graduation and starting a family he continued to raise pigs.  While delivering one load his pregnant wife went with him hoping that the bumpy ride would convince their third child (already past due) that it was time to make her entrance. They had a good trip together, but that slowpoke still waited a few more days!

Eastern States opened a store in Grove City a month after Jack was married in 1957 and he was there from the beginning with just three weeks training at the store in Greenville. After leaving Eastern States, he helped yet another neighbor grinding feed for local farmers.  His next job was at Cooper Bessemer from 1965 to 1968 as a tool grinder, with a short time on the erection floor.  He then bought his brothers dairy herd and until 1972 milked with the “help” of his young kids.  They shared his love of the animals but their tender years made the help they could give questionable and through a string of bad luck they had to give up the herd to pursue other ventures.

While farming was always his first choice of occupation;  with a wife and six children to feed and clothe he spent many years sharing his time on the farm with working at other jobs.  In 1972 he was hired as a mechanic and occasional driver for Grove City Bus Lines, a job that took him all over the country keeping the buses running and occasionally limping a “crippled bus” home.  Working at the bus lines gave him the opportunity to drive the bus hauling the local FFA & FHA chapters to the Pennsylvania Farm Show during the years his children were members and several years beyond.  His wife also went along as a chaperone and they became Mama & Papa (Grace) to all.

In the 1880’s a section of the farm was deeded over to form a community cemetery.  The family was instrumental in the organization of the original charter of the Union Home Cemetery Association.  He has held the role of Vice-President since his father died in 1987;  with other family members also serving on the current Board of Directors. James, his father became responsible for the grave openings and burials in 1942 and  Jack along with children and grandchildren are continuing this service today.

In 1962 he had helped his parents build a small roadside stand on the farm and then he and his growing family helped in getting vegetables grown and harvested and also hauling fruit from orchards up along Lake Erie.  As the years progressed and his parents aged he took on more of the responsibility of day to day operations.  The original stand came down in a storm in the early 80’s and was replaced with a larger market over the next few years.

While attending Vegetable Field Day at Rock Springs in the late 80’s he joined the Pennsylvania Vegetable Growers Association which led to attending growers meetings in his local area of the state and then the annual Vegetable Conference (as it was then called) in Hershey.  He heard of the need for volunteers at the PVGA Food Booth at the Farm Show so he and his daughter Jackie volunteered for a shift each.  Now 20 some years later he and his daughters Jackie and Nancy spend the entire week each year making from 500 to 700 gallons of soup to serve up to the Farm Show crowds.

At one point Jack decided to raise his own vegetable transplants and the front porch of the house became a makeshift greenhouse.  As neighbors saw what he was doing, requests started pouring in for him to grow some for them too.  That small porch operation has evolved into four greenhouses supplying the community with spring bedding plants, patio pots and hanging baskets as well as hardy mums and perennials in the fall.

Through the years things have progressed from crawling down the rows digging holes for the transplants by hand to finding and using that old bare ground transplanter and then shocking the neighborhood by getting the newfangled flat bed plastic layer and water wheel transplanter with padded seats! (For a few years, the padded seats had everyone volunteering to help with transplanting!).  Cars stopped along the road as neighbors and strangers alike walked across the field to see what in the world that machine was.

The operation has grown from that small 8 ‘x 12’ roadside stand to a farm market that supplies seasonal fresh fruits and vegetables to the community, a greenhouse operation, and a gift shop with glass gifts and collectibles made in West Virginia, Ohio and Pennsylvania as well as and other handmade items.  Although most of those six kids have moved on to other professions, they still gather to get things planted in the spring and for that last push to get harvested before tht first killing frost hits in the late fall.

With his priorities lining up as God, family and farming;  Jack Grace having Dottie, his wife of almost 59 years by his side owns and operates Graceland Farm Market with Dottie’s Dream just north of Grove City.  The family, including the fifth, sixth and seventh generations, is serving the community – beginning their 55th year of business, still on that same family farm!

The Association is most grateful for Jack and his daughters many years of faithful service at the Farm Show Food Booth.  Their willingness to manage the soup-making section of the booth for the entire week is an important contribution to the continued profitability of the project.