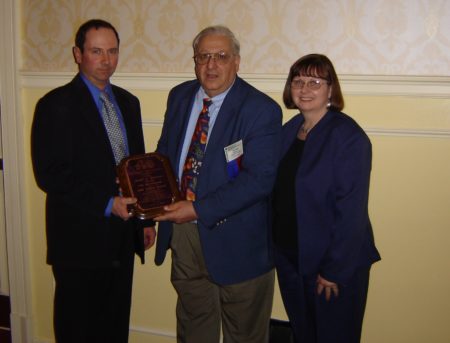 Dr. Peter Ferretti of Boalsburg, Centre Co. received the 2006 PVGA Annual Award and a Life Membership in the Association for “his extraordinary record of service and dedication to the Association and the vegetable growers of Pennsylvania.”   PVGA President Hilary Schramm, Jr., presented the award at the 2006 Fruit and Vegetable Growers Dinner at the Mid-Atlantic Fruit and Vegetable Convention in Hershey on January 31.  His wife Sandra was on hand for the presentation also.

Dr. Ferretti has been on the facility at Penn State University for over 36 years.  He was born and raised in Nazareth, Pennsylvania and graduated from the Nazareth Area High School.

He joined the faculty in the College of Agriculture in the Horticulture Department at Penn State in November 1969.

Currently Dr. Ferretti is in a 94% extension and 6% research position in vegetable crops.  His extension program is directed at specialty and direct-marketed local commercial vegetables, value added vegetable types and products, vegetable bedding plants, and consumer horticulture in vegetables, including their promotion through the 5-A-Day program, WIC, and Food Stamps.  His research is directed at supporting his extension program and is focused on adaptive cultural methods for growing vegetable crops, especially of new varieties and types.

Much of the information for variety recommendations is obtained from Dr. Ferretti’s involvement in the trial gardens. If you want to know anything about vegetable varieties, he’s a walking encyclopedia on them.  For many years he has also organized the vegetable exhibits at the Pennsylvania Farm Show.

He has been closely involved in the growth and development of the Pennsylvania Vegetable Conference from its days in the Nittany Lion Inn in State College through the move to Hershey in conjunction with the fruit growers.  He has served numerous times as program chair, spending hours on the phone trying to line up just the right speaker for a particular topic.   He has also worked closely with PVGA in organizing dozens of field days and field tours throughout the state, again with close attention to the details, including the food end of the arrangements.  More recently, he has helped develop the Association’s successful vegetable stir fry at the Ag Progress Days booth.

More recently Dr. Ferretti became involved in international issues by traveling and consulting in Ukraine through the Citizens Network for Foreign Affairs program. During one visit he provided production, handling, storage and marketing ideas to intermediate size farmers in three major districts of the Zaporizhzhya region and during the other visit he taught farmers in three villages about pollination and applying proper harvesting techniques. He helped two other participants to get involved in the program and returned last summer for a third visit.

He is also actively involved in his local Lions Club and church, Our Lady of Victory, in State College.

He and his wife Sandra live in Boalsburg where he enjoys gardening and cooking.  They have three daughters who are all graduates of Penn State. They also became grandparents for the first time this year.  Dr. Ferretti will be retiring from Penn State this year and plans to spend more time with his family and travel.