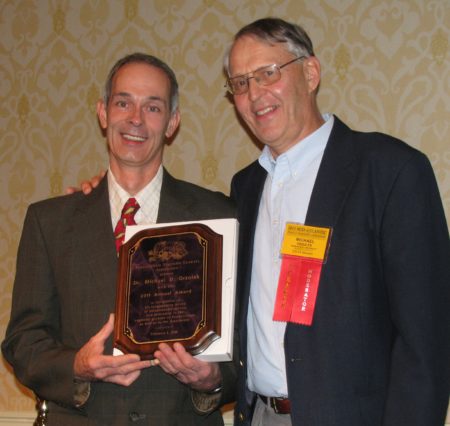 Mike Orzolek is a well-recognized leader in the field of olericulture or more commonly known as vegetable production. As a young man he obtained a Bachelor of Science Degree in Biology from Alliance College.  He then went on to attend the University of West Virginia and obtained a Master Degree in Horticulture. His first position was teaching biology at Jefferson Community College, in Watertown, New York, which he did for a brief period. He then went to the University of Maryland and earned a Ph.D. in Horticulture.

Mike has worked with almost every vegetable and weed imaginable to man. His latest foray is into the world of truly specialty crops such as taro, ginger and mangoes. He has been heavily involved with the use of plastics in horticultural crop production for many years, with his latest efforts being in the use of plastics in high tunnels and more recently on movable high tunnels. He has worked with all phases of the plasticulture system.

He has spoken at just about every commodity meeting that exists on a wide range of subjects. He has been in leadership positions in the American Society for Plasticulture as President from 2000-2002 and also was President of the Comite International des Plastiques en Agriculture from 1997-2000.

Somewhere he found the time to get married to his lovely wife Judy and raise three fine daughters Tara, Missy and Erin.  He is also a very proud Grandpa.

He is a tireless worker that has the grower’s interest at heart and he is always thinking outside the box on how to improve things. He has worked on and supported the Pennsylvania Growers Association and the Mid-Atlantic Fruit and Vegetable Convention since he arrived at Happy Valley. His body of applied research, teaching and extension activities, his commitment to the growers of Pennsylvania and beyond serve as a benchmark for the younger members of the profession to strive and attain.