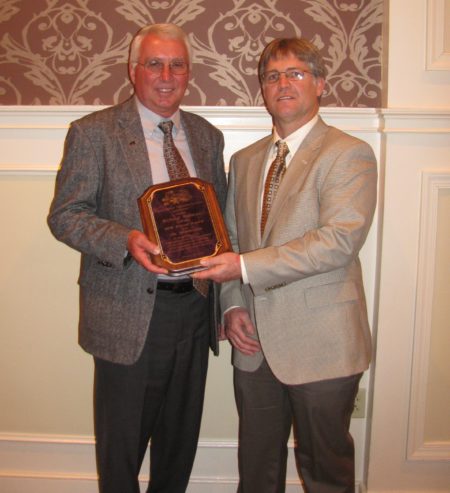 Richard Pallman graduated from Penn State with an agronomy degree, and then, he, along with his father and brothers, developed the family farm in Clarks Summit into what was once one of the largest fresh market tomato operations in Pennsylvania.  They also developed a 15 acre pick-your-own strawberry operation and a retail turkey business growing and processing over 10,000 birds annually.

Rich and his family worked closely with Penn State Extension in the 1970s and 1980s to develop recommendations for banding their fertilizer for their tomato crop resulting a 50% reduction in fertilizer use – a economic and environmental benefit.

Besides serving three years as President of PVGA and sixteen years as a Director, during which time the structure for current joint convention committee was established for the Mid-Atlantic Fruit and Vegetable Convention, Rich also served on the Pennsylvania Vegetable Marketing and Research Program Board, including several years as chairman of that Board.

Rich was also very involved with the Pennsylvania Farm Bureau, serving as county president, and state board member.  In addition, because farm labor was major issue for the family’s tomato operation, he was on both the state and national Farm Bureau farm labor committees and served as chairman of both groups.

Locally he has served as chairman of his township zoning hearing board as well as serving on the finance and building committees of Countryside Community Church and Schultzville United Methodist Church.  He was active in several gubernatorial and presidential election campaigns.  In 2001, Rich became the state Farm Service Agency director for eight years for Pennsylvania.  Rich and his wife have a son and daughter plus grandchildren.