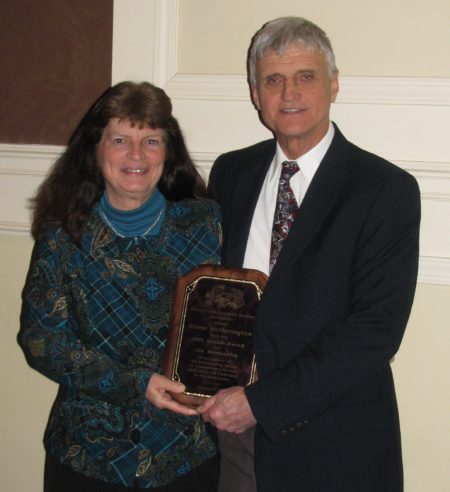 Born in 1943, Glenn R. Hetherington, grew-up, played and worked on the 128 acre family vegetable growing operation in Ringtown, Schuylkill County.   He graduated from Ringtown High School in 1961 where he played baseball and basketball.  He was a 4-H member and on the potato judging team.  His father, Ray (also a former PVGA Director) and mother, Helen, grew a wide variety of vegetables that they sold locally – huckstering on the streets of nearby towns and selling at the Philadelphia market.  They also grew some chipping potatoes to supply the WISE Chip Co. in Berwick.

Glenn graduated from Penn State University with a B.S. degree in Agricultural Engineering in 1965 and went on earn his Masters’ degree, also in Ag Engineering.  In 1967, he accepted a position with Firestone Tire and Rubber Company in Akron, Ohio as a tire design engineer.   Upon passing the licensing exam he became a certified “professional engineer,” a license that he held in both Pennsylvania and Ohio.

As the saying goes, “You can take the boy off the farm but you can’t take the farm out of the boy” – Glenn made the decision to return to the family farm in 1977 as his father was having some health problems and Glenn’s heart was not in the tire industry but on the farm.  The farming operation had not changed that much and they still grew a variety of vegetables – tomatoes, cabbage, pumpkins, cucumbers, squash and potatoes for the Philadelphia market, the Berwick Co-Op, vegetable brokers, and WISE Potato Chip Co..  Soon Glenn began making improvements to the operation.  As reliable labor became more difficult to come by he looked to expand growing the crops that required less hand labor and used more mechanization.

In 1981, he designed and built a potato storage for storing chipping potatoes long term.  Glenn’s goal was to provide WISE Chip Co. with the best quality chipping potatoes he was able to grow and store.  Over the years, the variety of vegetables grown on the farm became fewer and fewer, the last to go were tomatoes and cabbage.  He was now growing and storing 50 acres of potatoes for WISEs with a rotation of small grain, primarily oats.

In 1987 and 1991, he was able to expand the operation when he purchased additional acres and what is now the “home” farm.  In 1995, he built another potato storage with the capacity to hold 25,000 cwt on the new home farm.  The operation had now expanded to 130 acres of potatoes with small grain and hay in the rotation.

Over the years, Glenn worked with Penn State Extension and the local county agents on a number of vegetable and potato variety trials.  There were many “twilight” meetings held at the farm.  He and his mom cooperated for many years with the late Dr. Alan McNab to collect data for what was to become the Blightcast late blight predication program.  Numerous potato variety trials were planted in conjunction with Dr. Plasted from Cornell University and Dr. Barb Christ at Penn State.  Most recently he worked with the PSU horticulture department on a nematode study in connection with verticillium wilt in potato ground.  He also cooperated with the Natural Resource Conservation Service and implemented numerous conservation practices on the farms.

In 2007, he was awarded the “Farm Cooperator of the Year” by the Schuylkill Conservation District in recognition of the efforts and best management practices he had implemented on his operation in order to conserve soil, improve water quality and better the environment.

In 2009, he installed a grain drying and storage system on the “home” farm and then expanded the storage capacity to 90,000 bushels in 2011.

In 2012, Glenn decided that it was time to “semi –retire” and gave up his life-long passion of growing potatoes due to difficulty in obtaining labor, the physical demands of growing the crop and the increasing uncertainties and frustrations with his primary market.  So, in 2013, he decided to add more acres to the operation and purchased a 100 acre farm.  Proving that “you’re never too old to learn” he started at the beginning of the learning curve with growing corn and soybeans using the no-till system.  For a farmer that had plowed in order to plant potatoes and turned the ground over to harvest them, and had the very first roll-over plow in the Ringtown Valley, this was a very new concept to understand!

Presently the operation includes 602 owned acres; 425 acres of which are cropland, plus an additional 125 acres of rented land.  Of the 550 farmed acres, 300 acres are planted to corn, 175 acres in soybeans and 75 acres are enrolled in the CREP program.  Glenn hasn’t gotten away from growing vegetables totally.  This past summer he planted and maintained a vegetable garden – sharing most of the sweet corn with the local raccoon population!

He met his wife, Martie, at the Vegetable Growers Conference in Hershey in 1978.  At that time, she was a County Ag Agent working for Penn State Extension in Bucks County.  They were married in 1984.  They have a four- footed family of two cats, two dogs and three frogs!