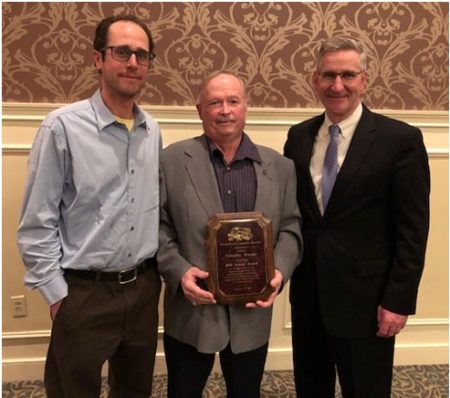 Tim graduated from Bermudian Springs High School. Growing up on a fruit farm, one of his first jobs on the farm was watering young fruit trees after school. Because he wanted to see a different part of the country, Tim headed to Kansas where he earned a degree in Industrial Education at McPherson College in 1972.

Returning to the family farm in York Springs, he planted several different types of vegetables to be sold at the family-owned and -operated retail farm market. He always liked trying new varieties to see which ones would produce the best yield. In 1980 he built a greenhouse to start vegetable seedlings to plant in the fields – a phase of the operation that has expanded over the years as plants and flowers were added to the products sold at the retail farm market. In 2010 he added a high tunnel to do a study on different types of tomatoes and their yield.

Besides growing about 25 acres of vegetables and 100 acres of fruit and berry crops for the retail farm market, Tim also grows about 300 acres of corn and soybeans and has been a Doebler’s Seed Corn representative for over 43 years.

Weiser was named “Outstanding Young Farmer” in 1990 by the Bermudian Jaycees for outstanding leadership in agricultural endeavors and has also been named a Master Farmer by the American Agriculturalist. He received The Blue-Gold award from Bermudian Springs FFA in 2012 for his continued support of the Bermudian Ag Ed Program and the Bermudian FFA Chapter.

Tim served 9 years on the Board of Directors of Adams County Cooperative Extension Association during which the new Adams County Conservation Building was built. In addition he has served on the State Horticultural Association of Pennsylvania Board and served as the president from 2014-2016 besides serving on the PVGA Board of Directors for 12 years. In his spare time he loves hunting and traveling. He and his wife Carol live in York Springs. He has two sons, a stepdaughter and six grandchildren. ‘

PVGA is pleased to its year’s Annual Award to Tim Weiser in recognition of his longstanding record of service and dedication to the fruit and vegetable industries of Pennsylvania.